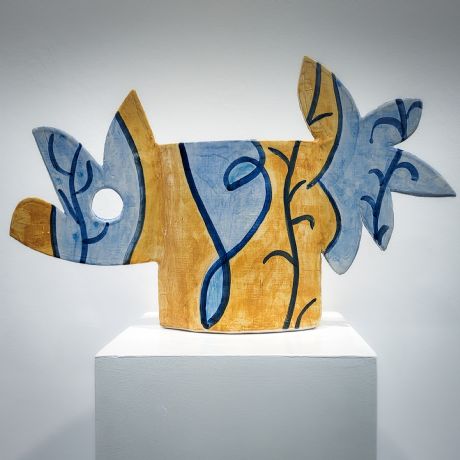 Peter Arscott is a painter and ceramicist who uses either grogged porcelain or stoneware glaze-fired to nearly thirteen hundred degrees. Before this happens, he bisque-fires his pieces to a thousand degrees and then paints oxides and stains on them before dipping them in a transparent glaze. Everything is made by hand or on a slab roller, he does not use a wheel, and little planning goes into the shapes or the colours – cutting out and joining pieces and fragments as the mood takes him, or brushing on certain colours because he has seen a Paul Klee painting or been on a walk-in Wales. As a result of this approach, he does not make things twice, and though you can put flowers in his vases he himself is not interested in function and is more interested in playing with form and allowing the pieces to work as paintings.

Peter Arscott was born in Lima, Peru in 1954. He came to school in England at 13 and later studied at Bristol University before moving to Barcelona where he worked as a teacher and had a number of solo and group shows until 1983 when he returned to live in London, working as a Blue Badge guide and exhibiting at various galleries.  He now lives in Herefordshire and has a studio in Ledbury. He is a founder and a director of the Ledbury Poetry Festival and is involved in the arts locally.