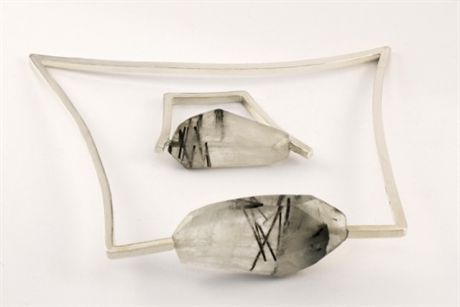 Title:  Bangle and Ring
POP
Description: Silver and Rutilated Quartz
Artist: Genna Delaney
Profile: Genna Delaney had her heart set on becoming a jewellery designer while studying Art at school. In 2006, she graduated from Duncan of Jordanstone College of Art and Design with a BDes(Hons) Jewellery and Metal Design, and set up her business based at WASPS Artists Studios, Dundee. Genna is extremely passionate about designing and making jewellery, and focuses on movement, playfulness, quality and originality within her pieces. Her Kinetic designs have already won a Precious Metal Bursary Award from the Goldsmiths Company (Labyrinth Neckpiece pictured top left) and attended their Getting Started Business Course in January 2007. She loves to work in precious materials but also incorporates non-precious materials such as semi-precious stones, perspex and resin, adding colour to catch the eye. Genna has a vast range of jewellery to suit everyone's needs. For example she enjoys taking on commissions to add that personal touch and individuality for her clients but also has various commercial ranges. Her main influences are Architecture and the Scottish landscape. With a love for colour she introduces unusual and rare stones which the wearer can play with and move along the labyrinths of her pieces. Genna has exhibited at many events including New Designers and Islington Contemporary Art and Design Fair, London, Scotland's Autumn Trade Fair 2007, Glasgow, and was selected for Gifted, National Museums of Scotland, Edinburgh and the Visual Arts Scotland exhibition 2009, Edinburgh. This year she will be exhibiting at the British Craft Trade Fair, Harrogate, in April, The Royal Highland Show, Ingelston, in June and Edinburgh's West End Festival, in August. She currently has 10 outlets who stock her work, including Hanna's Gallery, Dundee, The Marchmont Gallery, Edinburgh, The Angela Mellor Gallery, Hereford, Brazen Studios, Glasgow. Genna has been featured in the Cultural Enterprise Office publication A View, Jewellers : The Directory (ACJ publication) and various magazines including Vogue.