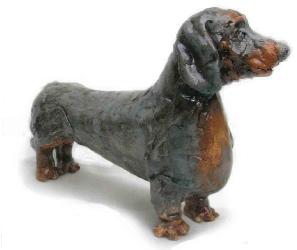 Title:  Cut Dax
POA
Description: Ceramic Dax
Artist: Anne-Marie Marshall
Profile: Anne-Marie was born in 1969 in Malvern Wells. As a teenager she spent some years in Japan. From an early age Anne-Marie has drawn and modelled animals, but it was while at Brockenhurst College that her interest in ceramics developed. After completing her Foundation Year in Salisbury she returned to Tokyo, and was able to pursue her interest in the study of Japanese ceramics. In 1992 she gained an Honours degree in Three Dimensional Design (specialising in ceramics) from Middlesex University. While at college she spent a summer in Sicily working with a local potter. She has been employed as a part-time teacher of ceramics at The Godolphin School, Salisbury, and Brockenhurst College. She is Artist in Residence at Pangbourne College, Berkshire. Anne-Maries work is based on the sketches of animals she draws from her home environment in the New Forest and her visits to zoos and wildlife parks. This summer she was able to study the wild life of Kenya. Her pieces are made from rolled T-material or red earthenware. They are decorated with oxides and dry stone glazes. In 1993 the Daily Telegraph colour magazine featured her work, then on show at Ceramics Contemporaries Exhibition at the Victoria and Albert Museum in London.